My Family Finder results came in today (over a month earlier than estimated!).  I was a little disappointed with my matches, or lack thereof (none were closer than 4th cousin range), but I know the database will only continue to grow.  I was pleasantly surprised when I saw my Population Finder pie chart though: 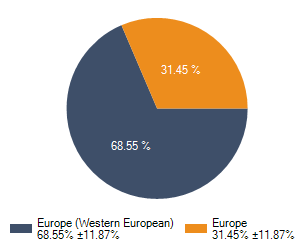 I was expecting just a blanket "100% European" - which is what each of my parents got at 23andMe.  The big blue slice is that generic Western European ("French, Orcadian" under population) I was expecting.  The orange slice represents "Romanian, Tuscan" (aka Southeastern/Southern European) and on the corresponding map that came with the chart Romania and the countries around the Adriatic are highlighted.  Considering that a quarter of my ancestry is Southern Italian, the orange slice makes sense - I'm just surprised they were able to distinguish it from the rest of Europe.

I'm especially impressed that it picked up on the Adriatic connection specifically (represented by the "Romanian" I believe) as my Italian ancestors are from the village of Vieste, which right on the Sea.

For anyone interested in what the Population Finder is and how it is calculated, see here.

Full disclosure: No one but little old me paid for my Family Finder test, nor did I receive remuneration or prompting of any kind from anyone to write this post.
Email Post
Labels: genetics

Ancestors in Canada 150 Years Ago