When it comes to Texas genealogy, I just have a few collateral lines that headed for the Lone Star state.  Sometimes I wish I had more ties to the area just so I could take more advantage of all the wonderful resources available.  One of these 'wonderful resources' is the collection of Texas Death Certificates online (both FamilySearch and Footnote have collections).  My third great-grandmother's nephew (Patrick Henry "Dobe" Hudson) and his family appear in the collection.  They settled in Fannin Co. where Patrick died in 1911.  Interestingly, he has not one, not two, but three death certificates: 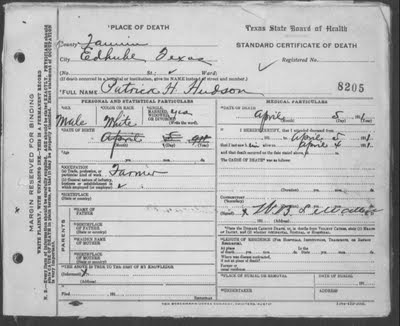 Certificate #1 doesn't offer much information at all - not even his full middle name.  Note the death date of April 5th.  No medical or personal information is provided, beyond the fact that he was a farmer.  If this was the only death certificate available for him I'd be thoroughly disappointed.  Luckily... 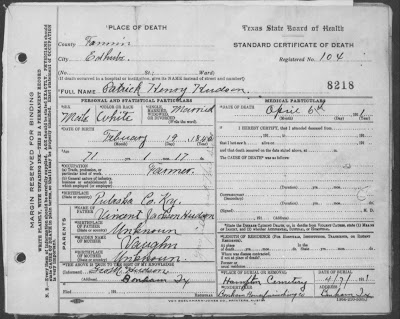 Certificate #2 is much better.  This one, however, gives Patrick a death date of the 6th, not the 5th like above.  It also provides some personal information on him like his birthday (Feb. 19, 1840), place of birth (Pulaski Co., Kentucky), his father's name (Vincent Jackson Hudson) and his mother's maiden name (Vaughn).  I was also able to learn where he was buried: Hampton Cemetery in Bonham. 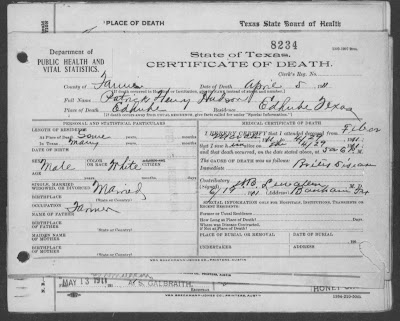 The death certificates for Patrick's widow and their children aren't in triplicate so I don't know why Patrick alone had three, or why they couldn't seem to get all the information on one.  Looking at the certificates, I imagine the first one was rejected because there isn't much of anything filled out.  Two was probably rejected because no medical information was provided, including a physician's signature.  Interestingly, certificate #2 is the only one with a registered number (104).  I wonder if I were to order his death certificate from the county, which one would they send me?  #2?  All three of them?  It makes me curious about how many more relatives I have out there with more than one vital record for one event...

Patrick's FindAGrave entry (including a picture of his tombstone), is here.  His father, Vincent Jackson Hudson, was my third great-grandmother's brother.
Email Post
Labels: Hudson

Thank you for commenting!

Ancestors in Canada 150 Years Ago